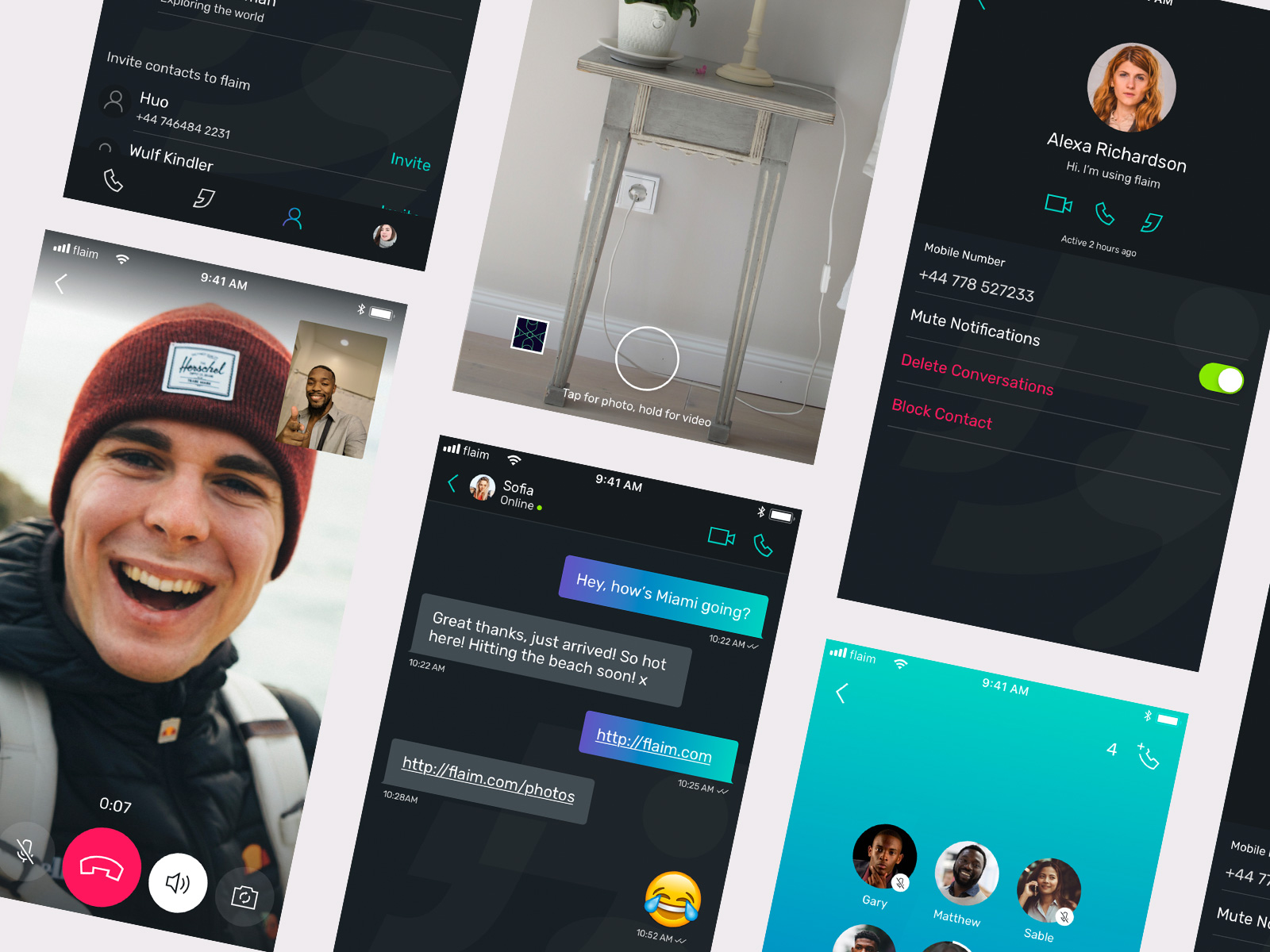 A secure, social messaging app for people
within emerging markets

In a bid to take on the established players of the messaging world, Equiis Technologies knew that they needed to design and develop an app that met their users needs. That app would eventually be called flaim, and was created on the fundamental concept that users should have complete control over ownership of their data.

flaim launched in Jordan and was immediately considered a success within Equiis Technologies. As a result, Equiis were keen to replicate that success in other emerging markets such as Nigeria, South Africa and India amongst others. Nigeria was the next launch country on the roadmap, so the UX team's efforts were very much focused on that area of the world.

Read on to discover how I was able to advocate an iterative, user-centered design approach that encouraged the team to think about users in a more empathetic way. Through discovery and cross-team collaboration, we addressed and advised on many assumptions made within Equiis. Do people in Nigeria prioritise data security above all else? Are they concerned about data-allowance, and does this limit their smartphone behaviour? Do individuals find that data is too expensive? If they do use a communication app, what's their primary purpose for doing so? What are they really trying to achieve by using their smartphone, and can flaim provide a solution to this? 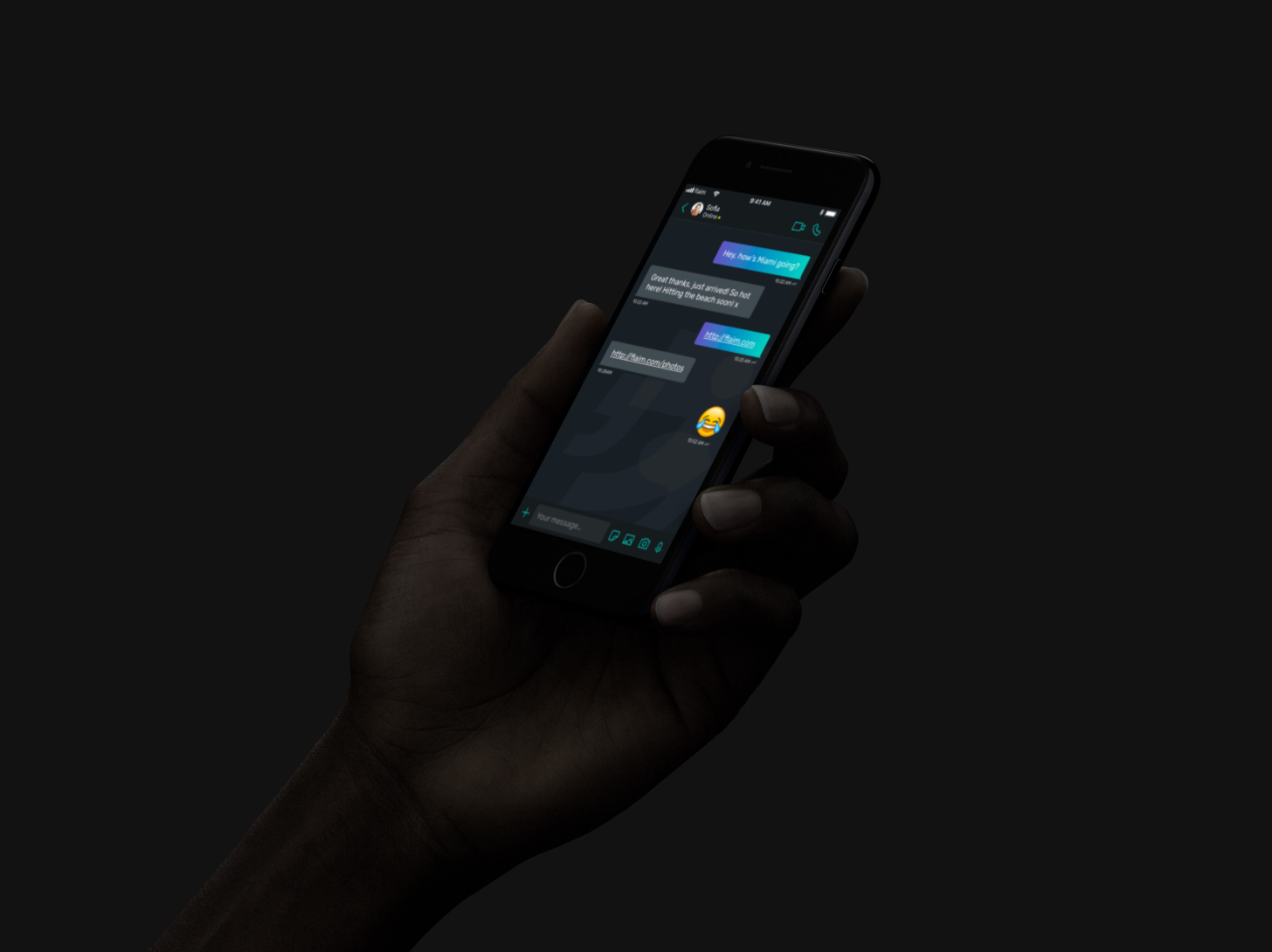 With little to no UX work having been carried out before, it was important that I acted immediately on joining Equiis Technologies. I wanted to understand what stakeholder expectations were, especially before moving on to conduct any viable user-research. Whilst many of the stakeholder interviews were an opportunity for me to understand the team, and ultimately what they wanted to achieve, it was also a good opportunity for me to promote user-centered design - and why it will have ongoing benefits for Equiis.

My initial impression from early discovery sessions was one of openness, and a want from the team to be frank and honest with me. The team were more than happy to answer questions such as, "In your words, what are the problems we're trying to solve?" and "What would be a reason why we would not be able to get this outcome?". Everything shared was transcribed and documented online, to eventually be shared with the wider team in a bid to be as transparent as possible. Anything deemed confidential was not shared.

I was very much given the green light to initiate and manage a series of user-research projects, which would be the basis for the UX roadmap. These projects ranged from trying to better understand users in Nigeria, through to smaller usability testing studies done on an ad-hoc basis in middle-eastern countries such as Kuwait. As you can imagine, given the different locales that I had to address and research, this was going to be a challenge - but one that I would definitely relish.

Note: Whilst one on one stakeholder interviews were hugely beneficial, I did also consider alternatively conducting internal stakeholder surveys. I wanted to do this with the hope that I would get honest, anonymous, feedback from all. However, based on the quality of answers from the stakeholder interviews, I didn't feel the need to pursue this any further. 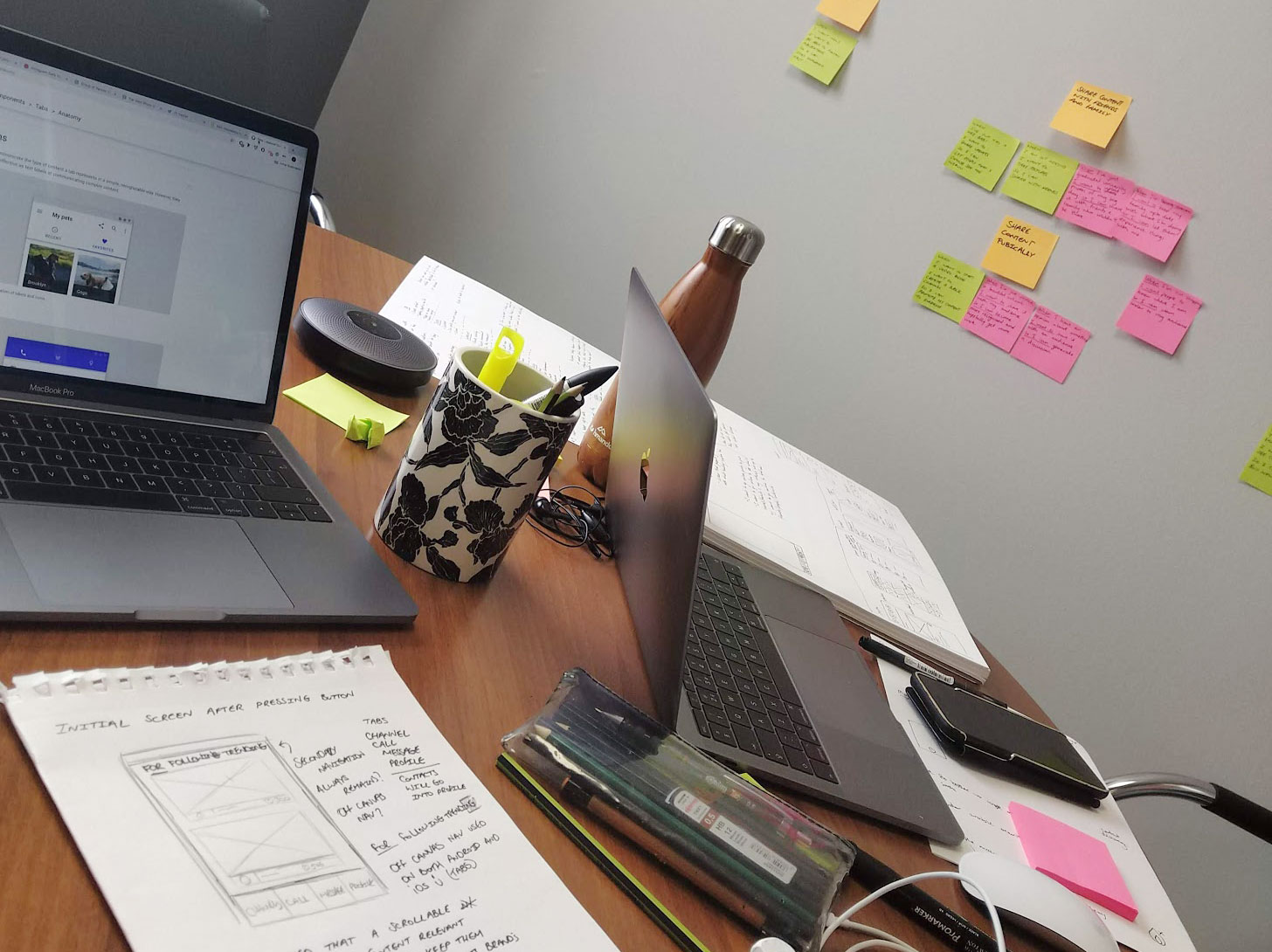 It's perfectly reasonable for things to get messy and hands-on whenever conducting one on one interviews with stakeholders. The synthesis of the discussion was saved in a much more organised Google Sheets file.

Process and roadmap for the months ahead

I had a simple, practical, three-step plan that I wanted to implement shortly after joining Equiis Technologies. I found that buy in for this plan was bolstered by the success of stakeholder interviews. Usability studies, surveys and 1:1 interviews/card sorting - particularly based around our next launch market, Nigeria.

Step 1, Usability Studies- I wanted to encourage the team to participate in ongoing implementation oversight, specifically, in setting up weekly usability studies that required minimal initial effort. How did I do this? userbrain.com - a remote, unmoderated way in which we could set out specific tasks for users to complete. Out of all the user-research techniques that I employed at Equiis Technologies, this was by far the most impactful when shown to stakeholders. They were often amazed at some of the feedback, particularly, whenever their own assumptions were challenged.

🕵️ Observations - Given that data is so precious to some people in Nigeria, users immediately struggled to find anything that resembled a "data saver" option within settings. This was both an issue due to poor Information Architecture within settings itself, and the fact that the data saver functionality in it's current form didn't actively describe what it did well enough.

Step 2, Survey's- It was apparent that stakeholders, and the company as a whole, could see the value in having a UX process. I immediately moved on to creating a series of survey's to target 18-30 year old Nigerians, that were adept at using their smartphones, with a 50/50 gender split. All the questions written had to be carefully considered, and we also had to recognise potential limitations of trying to source information in this manner. With a sample size of 200, the information that we got back was incredible. Users were also given the opportunity to participant in a closed-card sort.

🕵️ Observations - Survey's reiterated how important data conservation is within a country where people face many different challenges. Users were often downloading "lite" versions of popular messaging apps, as well as  implying they would often go into the options tab to ensure that the app isn't using too much data. There appeared to be a noticible trend in people using communications apps as their main source of information for employment, safety in the community and health issues.

Step 3, 1:1 interviews and card sorting - Finally, using 1:1 interviews sourced though testingtime.com, we were able to reach out to 3 individuals from Nigeria. This was hugely insightful, and coupled with the prior two steps, was an absolute powerhouse in communicating the need to address our users before, during and after project launches.

🕵️ Observations - Again, speaking 1:1 with people that live in Nigeria emphasised that data can be expensive and sometimes slow with patchy reception, especially outside of well populated areas. A number of respondants echoed the sentiment that communication was super-important to them, especially in regards to finding work, safety in the community and even health issues.

"User-research has the ability to guide us through uncertainty, answer questions and ultimately, help us create a product that actually facilitates solutions."

Note: In an effort to be as transparent as possible, I encouraged team-members to take any research they found, so long as it could be justified why it was relevant, and to place it on our UX wall. This created a sense of community, but more importantly, empathy. When people stopped to chat about new materials up on the UX wall, they were actively talking about people - people we knew we had to create solutions for. 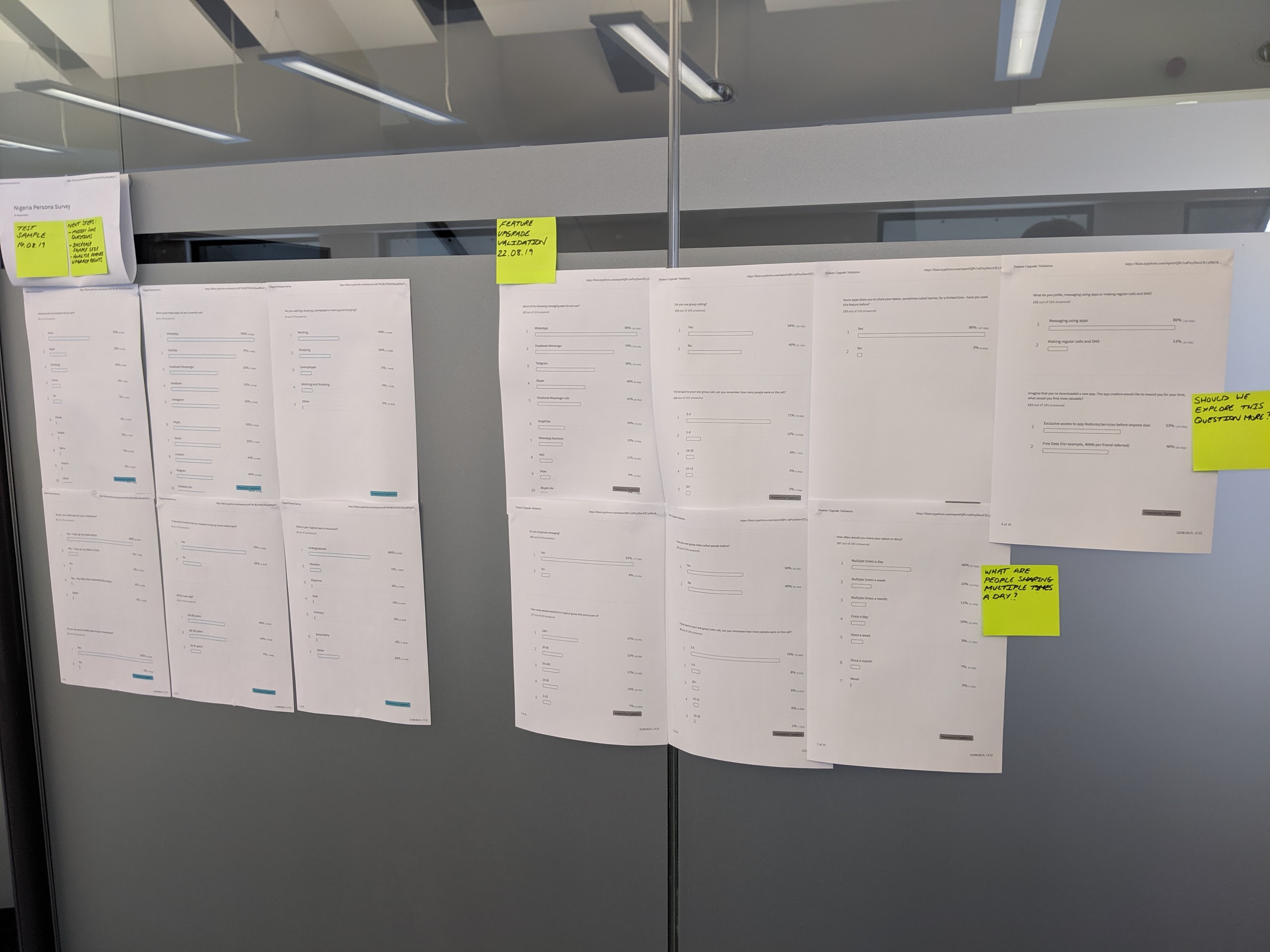 An example of an early version of our UX wall at Equiis, promoting discussion, debate and more importantly - empathy with our users. Through conducing 1:1 interviews and survey's, eventually the data would be represented though user-personas

Research, and the more conceptional aspect of design, not only worked parallel to one another, but in conjunction with one another. More often than not, insights would lead to a direct change in our designs - and that would result in myself and colleagues sketching down thoughts and ideas, which led to wireframing, prototyping and eventually high-fidelity concepts for stakeholders or development.

As an example, users often mentioned how difficult it was to find the data-saver option in our designs, so we changed it, and made it easier to find. Through conducing an closed-card sort using Optimal Workshop - We very quickly established a hierarchy within the settings tab that users would find more intuitive. We also discovered that users often want a more granular approach to data saving, as other apps allow you to save data but don't explain what that means and is usually just an on/off switch.

To summerise, here's what we discovered: 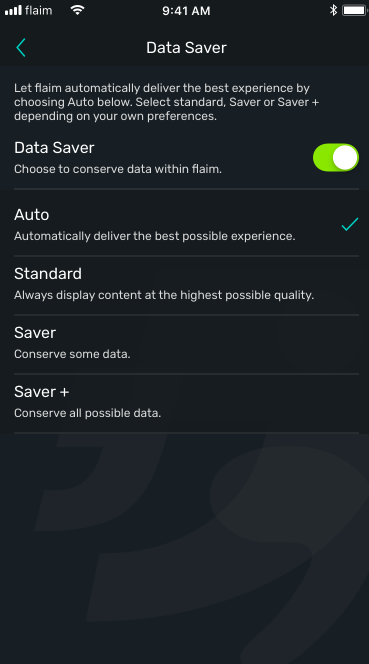 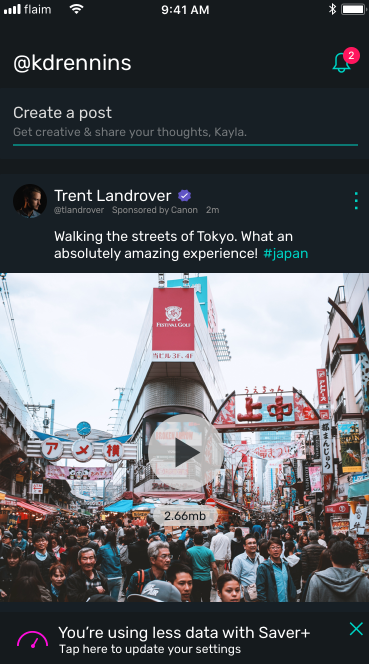 An example of some of the suggestions that the team and I came up with. On the left, a design for the data-saver section offering a more granular approach to saving data. On the right, a potential solution to alleviate concerns of using too much data with a friendly reminder

Thank you! Your submission has been received!
Oops! Something went wrong while submitting the form.